Carbohydrates are an energy source used for mobilization in the body. However, only a limited amount can be stored in the body; hence, it is important to maintain the supply in the body to prevent shortages. The alanine & proline carbohydrate mixture containing amino acids supports the conversion of carbohydrates from the diet to glycogen to enable storage in the body. During exercise, you can maintain your performance by supplementing carbohydrates into your body as needed. In endurance exercises such as marathons, amino acids are useful in maintaining stamina. In this section, we will look at the strategic supplementation of energy, which is essential for achieving best performance.

1. Supplementation with carbohydrates during exercise can maintain performance!

When you are losing your concentration while studying or at work, or when you lose your stamina while exercising, you want something sweet, right? Even in normal life, you can see that carbohydrates are an important source of energy. When engaged in sports, carbohydrates are one of the important nutrients used for energy. In endurance sports such as marathons, supplementation with carbohydrates at the right time can maintain blood glucose levels (which indicate the amount of carbohydrates in the blood) and maintain good performance (Fig. 1). Sportspersons need to consume enough food during three meals including breakfast, lunch, and dinner, to store enough carbohydrates in the body required for exercise.

2. The amount of glycogen in the body is the key to maintaining sports performance right to the end 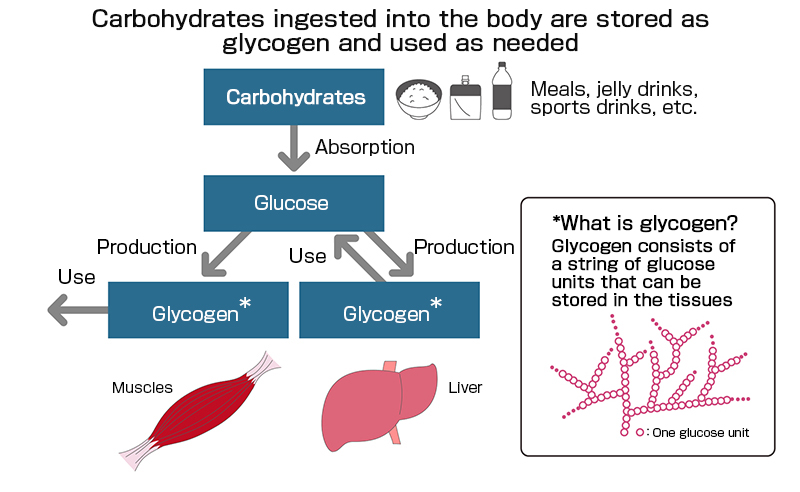 However, the amount of glycogen that can be stored in the body is limited. After prolonged periods of intense exercise, glycogen can be completely consumed. This leads to a lack of energy sources in the body, which makes it impossible to produce enough energy. This is one of the causes of a lack of stamina and fatigue occurring in the late stages of endurance sports. In other words, if glycogen can be stored in large quantities in the body, a sportsperson will be able to perform well right until the end.

3. Can ‘Alanine’ and ‘Proline’ convert carbohydrates into glycogen in the body?

By combining the functions of alanine and proline with carbohydrates, we aimed to enable the production of more glycogen from carbohydrates and to maintain blood glucose levels during exercise with the gradual supply of glucose from this glycogen.

4. The use of alanine/proline-containing carbohydrate mixture before and during exercise helps to maintain performance during late stages!

We examined the mechanism by which the use of the alanine/ proline-containing carbohydrate mixture before and during exercise alters performance (Fig. 4). Prior to and during the half-time break of a soccer game, male college students consumed the alanine /proline-containing carbohydrate mixture. In the late stages of the game (second-half with time at 30 min) they performed 20-meter shuttle runs to measure how far they could run (called the Yo-Yo test, commonly used as a measure of endurance).

▼Here are the challenges associated with amino acids.
Effective use of saccharides can enable optimum performance for a longer time! So how does it work?