Effective use of saccharides can enable optimum performance for a longer time! So how does it work?

1. Carbohydrates and glycogen: important sources of energy during exercise

In our bodies, carbohydrates and lipids are used as the main energy sources during exercise. Carbohydrates, in particular, are used more when the intensity of exercise increases. When the amount of carbohydrates decreases in the body, you will experience fatigue.

Carbohydrates are also stored as glycogen in the liver. When glucose in the blood (blood sugar) decreases during exercise, carbohydrates are converted to glucose and are used to maintain blood glucose levels. The amount of glycogen that can be stored varies depending on the individual’s muscle mass and other factors; however, athletes can store about 2000 kcal of glycogen, which is more than the general population (2300 kcal of energy is needed on less active days for men aged 18-29 years). As the amount of glycogen stored in the body is so low, exercising for an extended period will result in the loss of glycogen at the end of the exercise, resulting in poor performance.

For instance (Figure 2), when a marathon runner participates in a full marathon, at the end of the race, the speed decreases. A study showed that the runners ran at a speed of 12-13 km/hr from the start to the 12 km mark; however, the speed reduced from the 16 km mark. After 36 km, the speed reduced to less than 11 km/hr 1).

A study was conducted examining the speed of a soccer player during a match. Measurement of the distance covered at the considerably fast speed of 16-22 km/hr revealed that the distance covered at this speed in the first half and just after the start of second half of the match was longer than that measured at the end of the match (the last 15 minutes) 2). 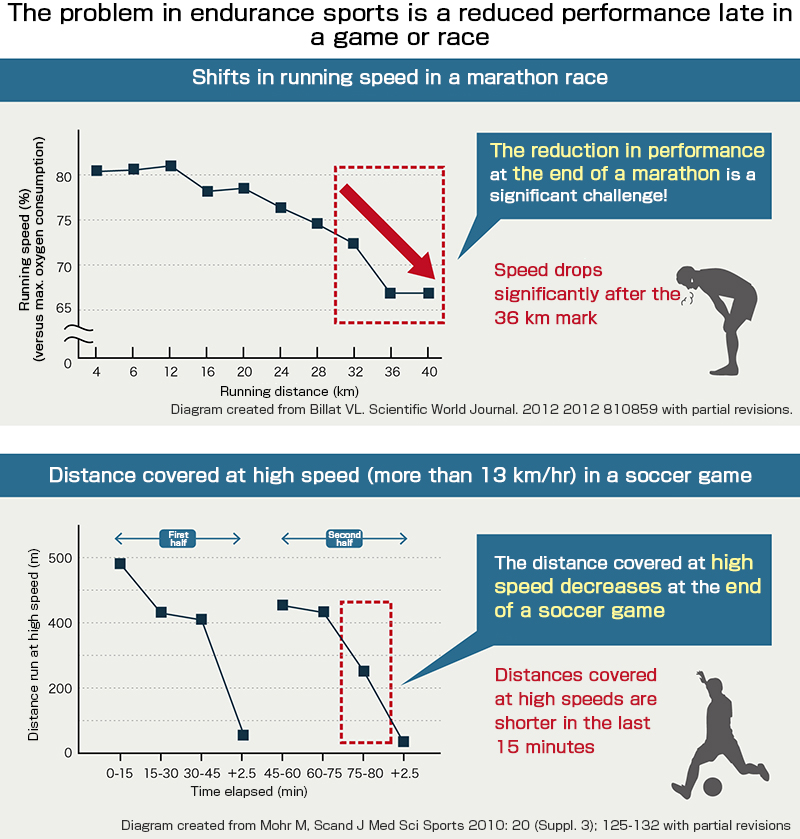 Thus, a long period of exercise leads to a decline in performance by the end, which results from the use and eventual elimination of glycogen in the body.

2. What are effective methods of carbohydrate supplementation?

The American College of Sports Medicine (ACSM) guidelines published in 2016 recommend a daily intake of about 5-7 g of carbohydrates per kg of body weight when performing moderate exercises for 1 hour or less per day, or around 6-10 g per kg of body weight when 1 to 3 hours of intense exercise is performed 3）. In other words, when a person weighing 60 kg exercises for about 1 to 3 hours, the recommended intake is 360 g to 600 g of carbohydrates (equivalent to about 6 to 11 bowls of rice) per day.

It is also recommended that carbohydrates be consumed before and after exercise and during exercise with the following precautions. Depending on the circumstances of the person playing the sport, the person’s physical condition, and the type of sport performed, the following points should be used as a guide (Fig. 3).

Pre-Exercise: ACSM guidelines recommend consuming 1 to 4g of carbohydrates per kilogram of body weight (60 to 240 g for a 60 kg person) 1 to 4 hours prior to exercise.

During exercise: For endurance sports with a duration of 1-2.5 hours, it is effective to consume 30-60 g of carbohydrates per hour. Considering the type of sport, the duration of the game/training, and your physical condition on respective day, it is recommended that you do not consume all at once but little amounts at a time for several times during exercise.

Post-exercise: Consider immediately supplementing with carbohydrates to restore glycogen in the body if games/training continues during the day. With respect to the following day, be conscious of glycogen recovery and think about your daily intake of carbohydrates so that you can sufficiently obtain it from your diet.

The following summarizes the points we have made about carbohydrates, an important energy source for exercise.

▼Here are the amino acids that solve this problem.
The “Alanine/Proline-Containing Carbohydrate Mixture” supports the use of energy from carbohydrates and maintains endurance He has completed the doctorate course at the Graduate School of Human Sciences, Waseda University (PhD – Human Science). After holding positions including PD Special Researcher at the Japan Society for the Promotion of Science, Researcher at Washington University School of Medicine, Researcher at Sankyo Mitsukyo Co., Ltd., Lecturer at the Consolidated Research Institute for Advanced Science and Medical Care at Waseda University, and Director at the Central Research Institute of Nisshin-Oillio Group, Ltd, in 2012 he became Associate Professor at the Graduate School of Arts and Sciences, University of Tokyo. He also serves as the Chairperson of the Japan Sports and Nutrition Association, a specified nonprofit organization, and the Director of the Editorial Committee for the Japanese Journal of Sports Nutrition.